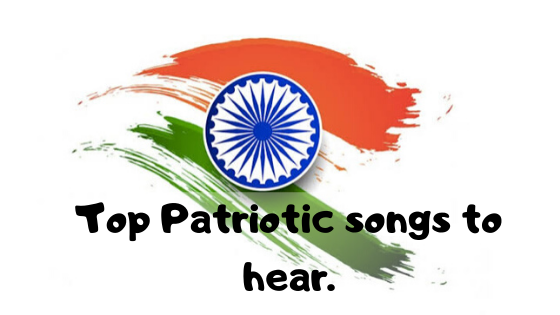 Aisa Des Hai Mera song from Veer-Zaara: Be it the people, places or the culture, it’s a country we live in & a nation we are proud of. ‘Aisa Des Hai Mera ‘ from Veer Zaara. Aisa desh hai mera song tells the story about how beautiful is our beloved country India is. It is one of the best patriotic song for republic day 2020 sung by Udit Narayan and Lata Mangeshkar with some touch from Gurudas Mann. Lyrics of Aisa desh hai mera has been written by Javed Akhter.

Mera Rang De Basanti From The Legend Of Bhagat Singh: Mera Rang De Basanti song is one of the best patriotic song for republic day 2020. when you here this song you tends to realize that the freedom we got was not come free, there were many heroes like Bhagat Singh, Sukh Dev and RajGuru who sacrifise their life for the country. Mera rang de basanti song is sung by Sonu Nigam, Manmohan Waris. Music of the song is given by A.R. Rahman. Lyrics of mera rang de basanti song is written by Sameer. listen this republic day song now.

Vande Mataram Lyrics (Original) – Bankim Chandra Chattopadhyay : Vande mataram Lyrics by Bankim Chandra Chattopadhyay is taken from his novel Anandmath. Vande mataram was originally published in sanskrit in 1882. The great poet Rabindra Nath Tagore Sung Vande Mataram firt time in 1896. In 1937 congress working committee had adopted the first two verses of vande mataram as the national song of India which was continued prior the independence of India. Vande Mataram lyrics is one of the most patriotic song. It generates the sense of patriotism inside the citizens of country. It can be sung at the auspicious occasion of Republic day on 26 january and Independence day on 15 august every year.

Rang De Basanti song by A.R. Rahman: Rang de basanti song by A.R. Rahman is from the bollywood movie Rang de basanti is sung by Daler Mehndi. It is one of the best patriotic song.Music of the song wa sgiven by the oscar wining music director A.R. Rahman. Rang de basanti lyrics is written by Prasoon Joshi. ‘Rang De Basanti’ the title track of the movie will evoke feelings of patriotism.It is one of the best republic day song to here.You will see Aamir Khan, Kunal Kapoor, Siddharth Narayan, Sharman Joshi and Atul Kulkarni preparing for their roles of Indian Freedom fighters for the British actress- Alice Patten’s documentary film. This patriotic drama is directed by Rakeysh Omprakash Mehra.


These are the top republic day song you must listen. Share these songs with your family and friends.